Swim4Miles coach, Chris Sifleet, told us of Jackie Eccleston’s brave solo bid to swim the 21.6 miles from Balloch to the far end of Loch Lomond in Scotland, on a sunny day between 5th and 10th August to raise money for The Friends Of Whitchurch Hospital.

The current record for the swim was set in 2012 by James Leitch in 9 hours 15 minutes.

A lifeguard and swimming teacher herself, Jackie has been training with Team Sharkbait in Dearnford Lake, courtesy of Rob Bebbington and in the beautiful Shropshire mere in Hanmer.

We wanted to help her train for it, so we gave her a Powerbreather Wave, and it clearly is helping achieve her training goals! See below what she says about it.

Jackie writes:
The Powerbreather is an incredible piece of equipment and once you feel confident using it you get a serious workout.
I started out doing 100m with it on and then without and repeated several times. Later on I could do the same with 200m then 500m, the most I used it for was 1000m. The exhale is easy whereas the inhale takes more effort. There is a slight drag factor too as the tubes run down each side of your face and it certainly takes away any staleness you may feel during a session. I think my times have improved over all distances, better technique yes but I have a feeling the Power Breather helped more than a little. 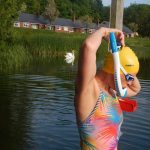 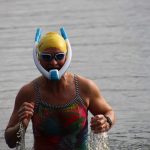 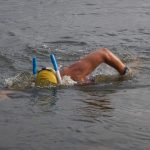 END_OF_DOCUMENT_TOKEN_TO_BE_REPLACED

How to fit and use your Powerbreather trainin...